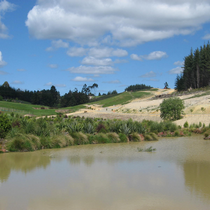 The Galeo Estate subdivision is a 29 lot residential cluster along with two farm or open space lots.  The development lies within the Rural 3 Zone in the Coastal Tasman Area.  Staig & Smith prepared the Resource Consent Application which included inputs from an interdisciplinary team of design and land management professionals.  Many issues such as road design, footpaths, fish passage, water, stormwater and wastewater along with earthworks design were dealt with in the consent process removing uncertainties in how the local authority would deal with those issues later at detailed engineering design stage.  The concept design was carried out using a series of overlay plans highlighting the site characteristics to allow the concept layout to be refined to optimise the opportunities and challenges the site presented. Sustainability was emphasised with particular attention being paid to layout of the subdivision in response to its natural attributes.  Rehabilitation of waterways included the installation of fish passage with a resulting increase in fish numbers and species.  Soft engineering was adopted for water management through the use of open swales and natural waterways and a minimisation of pipework.  Plantings helped to offset the increased runoff generated as a result of development.

Water harvesting for non-potable use has been encouraged to supplement the restricted supply from the Council rural reticulation scheme. Staig & Smith prepared engineering plans and worked closely with the developer during the construction phase.  Land tenure is by way of freehold titles along with titles held in common for jointly owned land. The developer demonstrated vision for the land and was deeply involved in wetland restoration, planting of riparian margins of streams and transformation of the property from its former rural use. The development has been awarded the New Zealand Institute of Surveyors Award of Excellence.